I have not written anything in months. By a show of hands who gives a flying flock? (Mom-mom put your hand down). No one? Good because all that matters right now is MONTANA!!!

In 24 hours the crew and I will board our flight to fish one of the most remote regions in the United States as we hike in to Montana’s Bob Marshall Wilderness. This week leading up the trip has been crazy. Final planning, trips to REI, printing google maps at work and reviewing the seemingly endless amount of lists I have composed over the last 5 months.

This trip is on the bucket lists of men who’ve accomplished much more than I have in the pursuit of trout, and probably life in general as well. Honestly, I have trouble believing we have made it to this point. Planning started two years ago and the destination was simply “West”. After some researching and debate we decided that if we we’re going to head West we might as well go big or not go. Only advice I can give to make a trip like this happen is to say you’re going to do it, and do it.

My friends have no clue where I’m headed. They know the State but where Ill actually be venturing off into they would not comprehend. My wife doesn’t really understand the idea of “Wilderness” either. She is scared to death, and when I take a step back and look at this crew of jersey boys heading into the Montana woods I cannot blame her….

Most likely to die via hypothermia or starvation: Chow 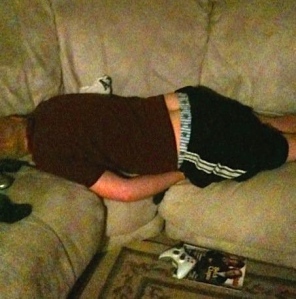 Chows typical day goes like this, wake up 8am go to gym. Back to couch, nap. 3pm head to rink where he coaches Ice Hockey for 2 hours then home and back to bed. He is not a professional hockey coach. He coaches underprivileged youth from Camden NJ. Very touching stuff, however his monthly paycheck lands him in the underprivileged adult category. Do to this chows had trouble allocating funds for gear necessary when hiking into the back country. His pack was our Aunts, a 1970’s contraption that George trash picked months ago unbeknownst to our sear Aunt Anne. His sleeping bag is Georges 25 year old “goose down”. His hiking attire exactly what he wears every single day my old gym pants and a t-shirt. When asked how he planned on eating with no mess kit or utensils, he replied bluntly “my hands, duh.”

Positive spin: His everyday gym and ice rink regimen finds him in exceptional physical condition. This plays in his favor if encountered by bear or Mountain lion. He will only have to outrun one of us.

Most Likely to Thrive and elect to remain in Wilderness as a hermit: Pops, aka George Costanza

George loves this shit. Guy once spent an entire summer in the Maine woods by himself. Had a garden for vegetables, chickens and a set of brass balls to stay in those woods alone. Pretty sure he killed his first deer at age 12. He’s part of a generation that officially announced its retirement the minute reality Television was conceived. The outdoors is the old man’s sanctuary. If the bathroom is occupied at home he has been rumored to grab some paper and head off to the woods to take a shit. That’s fuckin outdoorsy. 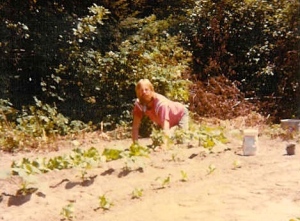 Old Man in his prime

Positive Spin: Neither one of my brothers, nor myself will survive at home without him. We will drag his skinny ass back to civilization with us.

Most likely to get stomped in tent by a grizzly bear: Peck aka Luke
The young gun of the group, he actually may prove to be resourceful in the woods. He is a self-proclaimed gear nut and the weight of his pack reflects this. Claims he wants everything needed for survival on “his person” in the event he gets separated from the group. 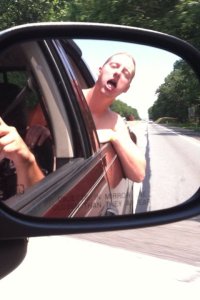 Luke can be expected to be carrying 4-6 knives, one of which is Randall and a wide array of gadgets purchased from REI. Why would a man so prepared be considered at risk for Bear attacks you ask? Luke does not always brush his teeth. From what I understand a grizzly bear sense of smell is strong enough to get a whiff of the evening’s dinner if he were to stumble upon camp.

Positive Spin: Time saved not brushing teeth can be used for fishing and general prospecting.

Most Likely to get lost: Me
I get friggen lost all the time. That IPhone map app is just the worst. For this my wife’s concerns are legitimate. Few other things I may fall under “most Likely’ would be as follows; most likely to assault and FAA employee if our luggage is lost. Most likely to drink too much and attempt some moronic athletic feat in the wilderness resulting in injury. Most likely to not sleep at night due to Bear anxiety. Most Likely not to venture more than 20 yards alone due to bear anxiety.

Now the threat of being attacked by a grizzly or mountain lion is apparently real. Hiking into a designated wilderness area is not something to take lightly. Honestly I have drug us all way in over our heads. In case I do not return I have to get sappy and mention my wife.

Heather and I have been together since I was in the 10th grade. We have never had a break in our relationship. Over the course of those 16 years my advice to kids younger than me was always the same. Rule number 1: Get with as many chicks as possible, do not follow in my footsteps. That rule remains number 1 and I will continue to divulge that advice when called upon. However, at this time I would like to officially announce an addendum to rule number 1. Rule 1 (a): If you are going to spend the majority of your youth and the unforeseen future with one woman, make damn sure it is a woman that will support you taking a trip like this.

Heather has been awesome. She has not nagged me on my countless planning sessions at my dad’s, my rod building days, and has made sure we had the funds for me to travel comfortably. Most importantly she understands how important a trip like this is to me and has made sacrifices to make it happen. She gets nothing out of it. Her ability to be so selfless and giving to a fishing clown like myself is uncanny.

So now I prepare to leave my wonderful wife and accomplish something we set out to do over two years ago. Writing this just a few hours before I depart hasn’t afforded me the opportunity to strive for “good writing”. I don’t give a flock. I’m flocking pumped!!!! Full report will be posted when we return!

This entry was posted in Uncategorized. Bookmark the permalink.