On April 26th I will marry my high school girlfriend, Heather. We have been together for 12 years, without a days break. With only four months till the big day we are in, what I consider, crunch time getting everything in line.

In short, it’s been a nightmare. And that is my excuse for slacking on a blog post the past two weeks. I won’t kill you all with details. Moving on.

As my blog title implies, I hate wedding planning, I love cane planing. (See what I did there?)

When the old man and I first started reading every building book not one author disagreed on the importance of a sharp plane blade. Builders went about sharpening in an array of intimidating methods. Everyone seemed to have a best approach, each requiring different equipment; stones (wet and dry), glass, leather, sandpaper, and machines. Having only sharpened my pocket knife, I had no clue how we would ever get sharp enough to cut cane.

Thankfully Jim Downes showed us his “no bullshit” technique before we made an attempt at any other method. It was and continues to be a simple process. We bought a two-sided diamond stone from DMT for about 90 bucks. Then I was able to find a lightly used Veritas sharpening hone for $40. After a few passes on that stone we were shaving sharp. We could have followed one of the other intimidating, less expensive sharpening methods. But for us, only spending $140, saving a lot of time and getting excellent results was money well spent. 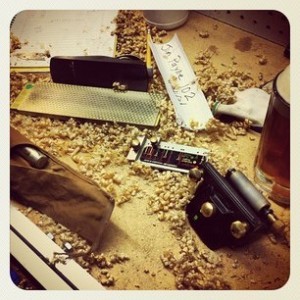 All we use to sharpen.

Once our tool was sharp we got to planing. We had no hesitations or fears as we began. Push the block plane down the strip cutting the bamboo; flip and repeat. Easy. Or so we thought. As our strip melted down to the form we began measuring for accuracy. Excitement filled the shop as our apex depth measured dead on our desired numbers. When we finished that first strip we sighted down the apex; plain eye test revealed disaster. We had managed to the create the most in-equilateral triangle the geometry world had ever seen. We simply overlooked this crucial detail. It was deflating. We had hit another road block in our rod building journey. Despite Jim’s mantra that he had developed for me: “Stay off the damned internet,” I went and did what I do when a question arises. I googled it.

Again, George and I were flooded with suggestions on how to correct our angles and keep them correct. We returned to our bench with a mirror, and determination. The mirror was set up at the end of our planing bench. Theoretically the mirror would allow one to watch the plane gliding down the strip, making sure to be kept paralel to the form. We found the mirror to be a little bit of a help, but for me the biggest improvement came from the simple consciousness of now knowing to keep the plane level. That and just feel. I would pause the plane on my strip and with a slight rocking motion guiding my fingers along the form, feel the plane into the correct position. 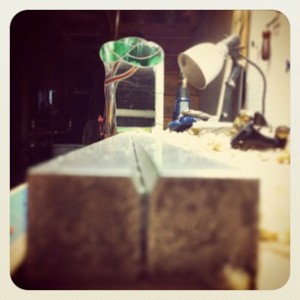 Our strips for that first rod, (after burning strip #1) had every angle within .003 of one another. It glued up great with not a glue line to be found.

Beginners like George and me read the famous books on making rods and came away with the impression that only certain methods will get the job done. Thanks to makers like Jim, and the old man being something of a Mcguiver, I found this to be the biggest misconception throughout the rod making process. There are no mirror type parlor tricks, nor any one way to accomplish a task. Only practice and repetition produce results. The only certainty is that building a rod is one provocation after another. Each requiring so much effort and concentration to overcome, are what emerge as a bamboo fly rod.

So while the wedding plans rage on, deep breathing, good beer and a sharp plane iron become just enough to keep me sane. As I move towards the big day, cane problems believe it or not are much easier to deal with than wedding problems.

This entry was posted in Uncategorized. Bookmark the permalink.