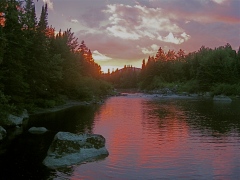 “Hello, George? Yeah, I think my rod has glue lines?” What? Doug I’m sure its ﬁne. “Yeah I
guess, but if I hold it up really close and in the light….”

That phone call was nearly four years ago, when I discovered glue lines in my $1200 custom- built cane rod, straight from a reputable maker. Before some of you veteran rod makers freak out, I get it. Bamboo is a natural material and that glue lines, like shit, do happen. To my own fault, I have above average eye sight, although I’m not sure why. Drinking milk as a kid? Or maybe the fact that my parents bought me a doll house as a child – that thing was full of minute ﬁxtures. To the objections of my meathead brothers and to set the record straight, it was a G.I Joe house; no dolls.

Anyway, whatever the reason for having an eye for details, and how I obsess over everything, I could have and probably should have dismissed the glue lines and ﬁshed the rod to death. But the whole thing made me bitter toward the overall experience. It wasn’t even the money that bothered me (most of which had been scrounged, saved and secretly stashed away from my ﬁancé), but some of the magic was gone. I hate to use that word, but it was. If not the magic, then the pride that came with using this handmade tool felt cheapened. And so I eventually sold the rod.

After 10 years of reading and studying bamboo ﬂy rods, the old man and I teamed up to build rods for ourselves. We re-read all the books, bought the tools and continue to work until we can make rods better. And if we ever do sell them, every detail will be obsessed over. I’ll know by looking at the raw, rough tapered cane exactly whose rod it will become. I’ll call that client and let him know at what stage of the build we are. I know I’d love to get an unexpected call from the guy making a rod just for me, breaking me out of the daily grind and giving me something exciting to look forward to.

But we’re not there yet, and I refuse to rush anything. A lot of learning, mistakes, and rods to be made. Now, why start a blog? That’s a bit of a different scenario. The old man suggested it when we ﬁrst started building, as a way to track progress and tell our story. I was a little hesitant, being so young, open, and ultimately new to the craft. But George said, “The rods will speak for themselves when the time comes.” He has a point. However, it was an argument with my ﬁancé that sparked me to actually start. It was a Friday night and she got on my case about how I never talk to her about ‘ﬁshing stuff’ or rod making, which is basically what I do with every spare second and what I’m so passionate about. The ﬁght turned brutal as all our ﬁghts do, ending with me kicking a hole in a door and both of us sleeping in separate rooms. How it went that far I don’t know. Anyway, the next day all was well, and I made a conscious effort to start talking to her about ‘ﬁshing stuff.’ It was shortly thereafter that she suggests I do this blog. Guess she got what she asked for.

So this is it. The old man and I making rods and learning as we go. (And frankly with NHL being locked out, we have free time.) So every Sunday morning, grab your coffee and check in, give us some feedback, and follow along on this journey of a couple of rod makers.

This entry was posted in Uncategorized and tagged Blog, DIY, Fishing, Sports, writing. Bookmark the permalink.